Inside are three radio bands that can deliver theoretical data rates of up to 5,332Mbps (1,000Mbps on the 2.4GHz band, and 2,166Mbps on each of the two 5GHz bands) and a 1.4GHz dual-core processor. It’s a 4X4 router, which means it uses four independent streams to deliver data, and it offers all of the latest 802.11ac Wi-Fi technology, including MU-MIMO simultaneous streaming, beamforming (signal steering), and Smart Connect (automatic band switching). The DIR-895L/R also supports DD-WRT Open Source, a Linux-based firmware that offers custom settings that allow you to tweak the router for optimal performance. D-Link AC5300 Ultra Wi-Fi Router, The Web-based management console is very similar to the one used on the D-Link AC1900 EXO Wi-Fi Router (DIR-879)$124.96 at Amazon. The router can also be managed from a smartphone using the mydlink Lite mobile app. The console’s home page displays a network map with basic statistics, such as client IP addresses and DHCP information, and issues alerts for any network issues. In addition to a Setup Wizard, the Settings menu contains an Internet page where you can configure DHCP, IPv4, and IPv6 network settings, and a Wireless page for configuring SSID, password, security, and channel-width settings. Here, you can also enable access schedules and set up guest network access. The Advanced menu includes drag-and-drop QoS settings, Firewall settings, Port Forwarding and Virtual Server settings, and Website Filter settings. The Management page is where you go to view system logs and network statistics, create access schedules, and update the router’s firmware.

Installation and Performance
Installing the D-Link AC5300 Ultra Wi-Fi Router, DIR-895L/R is simple using the Setup Wizard. To access the wizard, you connect your PC to the router using the included Ethernet cable, open a Web browser, and type http://dlinkrouter.local./ in the address bar. The wizard will walk you through the basic Internet and wireless configuration process, and takes less than five minutes. We tested file-transfer performance by moving a 1.5GB folder containing a mix of music, video, document, and picture files between a wired desktop and a USB drive connected to the router’s USB port. The D-Link AC5300 Ultra Wi-Fi Router  DIR-895L/R turned in a very fast read speed of 78.3MBps and a decent write speed of 39.5MBps. The Linksys EA9500 scored 38.5MBps on the read test and 35.5MBps on the write test, and the TP-Link Talon scored 56.8MBps and 27.9MBps, respectively.

Conclusion
In addition to its distinctive design, the D-Link AC5300 Ultra Wi-Fi Router (DIR-895L/R) stands out for its record-breaking throughput speeds and strong file-transfer performance. Its close-proximity MU-MIMO performance is second to none, turning in the fastest 5GHz long-range (30-foot) throughput scores we’ve ever seen. Its file-transfer performance is exemplary as well, and it offers all the latest 802.11ac features, including beamforming, band switching, and 4X4 data streaming. Granted, this router doesn’t come cheap, and it doesn’t offer the 802.11ad circuitry that you get with the TP-Link Talon AD7200 Multi-Band Wi-Fi Router, which costs $30 less, but there aren’t many 802.11ad clients available right now, and the DIR-895L/R delivers better all-around performance. As such, the D-Link DIR-895L/R is our Editors’ Choice.

RT-AC88U Gigabit Router instantly takes your wireless network to the next level. The latest NitroQAM™ technology boosts the Wi-Fi speeds for everyone and everything on your busy network. With wide Wi-Fi coverage, lighting-fast USB and WAN/LAN speed plus AiProtection and 8 Gigabit LAN ports, the RT-AC88U is as well-rounded as it is top-of-the-line. 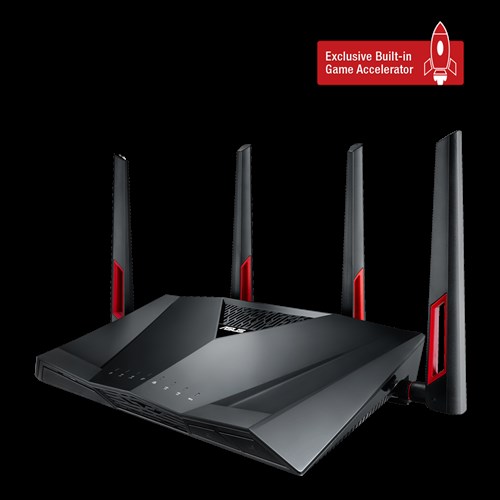 Whether you’re gaming online in a heated competition or streaming a live event in 4K UHD, lag and buffering are simply not an option. NitroQAM™ (1024-QAM) technology on the RT-AC88U delivers a combined 3167 Mbps Wi-Fi speed, ensuring everyone on your network can enjoy smooth streaming and low-latency online gaming.

Ping time and variance are critical technical parameters that affect responsiveness in online gaming, and their values depend heavily on the route game packets take to and from their destination. The Gamers Private Network® (GPN®) from WTFast® automatically performs route optimization, choosing the most efficient route for game packets, resulting in consistently-lower ping time and minimal packet loss. With RT-AC88U this optimization is free for accelerating one selectable device at a time, so you can enjoy the results on supported competitive multi-player online games1. Check out supported games list and more information about WTFast router edition here. Boost your gaming bandwidth with Gigabit Router Adaptive QoS (Quality of Service), which allows you to easily prioritise gaming packets and activities. You can even assign full dedicated bandwidth while gaming under gamer solo mode, making RT-AC88U the perfect ally for low latency gaming anywhere in your home. It supports major consoles including PlayStation®3, PlayStation®4, PS4™ Pro, PlayStation®Vita, Wii U, 3DS and Xbox One.

Networking is only half the equation when it comes to game performance. Anti-virus programs and 3rd party applications can consume valuable CPU and memory that could be reallocated to your game. With Gigabit Router AiProtection on the RT-AC88U you can confidently turn off these utilities while you game, ensuring every available drop of resource is spent enhancing your game. RT-AC88U Gigabit Router is the master of entertaining, able to support multiple of devices and Full HD 1080p streams simultaneously. Beyond content consumption, the RT-AC88U enables a smarter home, supporting IP cameras, thermostats and a variety of devices you don’t even own yet.

RT-AC88U’s top-of-the-line 1.4 GHz dual-core processor brings its computational capability to the next level. USB data transfers enjoy up to over 100 MB/s speed and the router download/upload speed (WAN-LAN throughput) up to 1800 Mbps5.

MU-MIMO gives every compatible device6 its own dedicated full-speed Wi-Fi connection, so that multiple devices can connect at the same time without slowing down the network.
In fact, RT-AC88U is able to connect to multiple MU-MIMO-compatible clients at each device’s maximum speed simultaneously, unlike standard single-user MIMO where individual devices have to wait for sequential transmissions7.

Contact us to have your Wireless Gigabit Router installed today.

A few appraisals put the measure of lost income over the business from lost appointments because of poor Wi-Fi at near £3 billion a year.
And keeping in mind that the civil argument has proceeded onward as of late from one of requesting free Wi-Fi to just needing productive Wi-Fi for which numerous voyagers are upbeat to pay an ostensible expense, still a sizeable segment of the friendliness area considers network to be a top of the line income thing for visitors as opposed to an essential administration (like towels).
The quality part of Wi-Fi associations is winding up plainly much more critical with visitors needing to stream substance, for example, video or connect for Skype calls or Hangouts.

At the end of the day: the Wi-Fi systems of only three or four years prior are likely no sufficiently longer to bolster a few properties.
Sign more cost for hoteliers, obviously, however – as some propose – an inn would supplant its towels and different things rapidly enough if visitors requested it, isn’t that so?
By keepmemag|2019-12-09T22:44:21+00:00April 3rd, 2017|Broadband|0 Comments
Read More Are You Having Telephone and Broadband Problems

Are you one of millions of people that are experiencing Telephone & Broadband Problems in the UK? Well Did you Know that when Alexander Graham Bell et al. pioneered telephones within the nineteenth century, their plan was to assist individuals to sit down with each other over long distances in “real-time.” though Telephone instrumentality was designed for carrying sounds, it steps by step became obvious that the technology had several alternative uses. throughout the late twentieth century, for instance, many of us started employing a technology known as fax (facsimile), that transmits written documents between 2 electronic machines, one at either finish off a phone line. once PC networks began to require off within the Seventies, it had been utterly natural to use the phone system to attach them along. however, this created an on the spot problem: computers exchange info (data) during a number-based type called digital, whereas the phone system had continually been designed to handle space ever-changing sound waves or analog info. however, might computers and telephones be created to grasp every other?

How to improve your broadband speed – Broadband Engineers in the UK

How to improve your broadband speed

When your broadband’s slow, it’s all too easy to start playing the blame game.

“Ooh that bloomin’ BT,” you might say. “Stupid Sky”, “Terrible TalkTalk”, or any number of similarly annoyed exclamations about your chosen provider. However, there are tons of things that can have an impact on broadband speeds – from old hardware to poor wiring and more.

Fortunately, there are some things you can do to give your internet connection a kick up the proverbial. But before you do any of them….